South Australia has officially closed its borders to Greater Melbourne as the COVID-19 Holiday Inn cluster continues to grow.

There are now eight cases connected to the outbreak with two more revealed yesterday; a worker and a previous resident who exited the facility on February 7.

The shock border closure came into force at midnight with Police Commissioner Grant Stevens saying, “our steps are taken in South Australia with an abundance of caution.”

Melbourne residents will be banned from entering the state, but SA residents and relocating travellers can enter but will need to quarantine for 14 days.

“We also have the fringe and festival coming up and we want to most positively have that go ahead. I am being extra-cautious and there’s some reasons behind that, and one is this particular variant of concern,” SA Chief Health Officer Professor Nicola Spurrier said.

“I’m hoping that this (border closure) will be able to be switched off as quickly as we have needed to switch it on.” 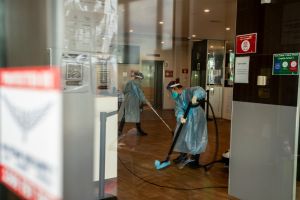 Victorian authorities believe a nebuliser required by one of the facility’s residents was responsible for the outbreak. It is 10,000 times more capable of spreading the virus than that of an infected person’s cough.

“Three cases are related to an exposure event that involved a medical device so that medical device is called the nebuliser and it vaporises medication or liquid into a fine mist,” Victoria’s Chief Health Officer Brett Sutton said on Wednesday.

“We think the exposures are to that event, this nebuliser, whereby the method of a virus was carried out into the corridor and exposed the authorised officer, the food and beverage service worker and also the other resident.
“That makes sense in terms of the geography and it makes sense in terms of the exposure time.”
Want more? Here's a bit we love from Will & Woody – catch the boys weekdays from 4PM on KIIS101.1!
border closure coronavirius COVID-19 melbourne SA south australia victoria