The NSW Emergency Services Minister remained on holiday in France with his family until Friday night, where he has been for the past two weeks whilst catastrophic fires burned across the state.

Dean Markham, a resident of Lake Conjola on the South Coast of NSW, who lost his family home in the New Year’s Eve inferno, told KIIS FM on Friday that he is “disgusted” by Mr Elliot’s actions and is demanding that he be immediately sacked.

“We had no water for two days. How hard would it be to get the coast guard boats from Ulladulla to drop tanks of water to the beaches – it’s a five-minute trip!” he tells KIISFM. “It’s an absolute joke and David Elliott needs to hang his head in shame and resign his portfolio. The rescue efforts have been a total s*** show. He is doing nothing to help any of the residents because he is still enjoying his family holiday in France. He should have been here doing his job and coordinating the Emergency Services.”

The embattled Mr Elliott finally returned to Australia late on Friday night and received a briefing from RFS Deputy Commissioner Rob Rogers – a fact which he revealed on Facebook.

“My absence over the last week was inexcusable. I should have put my RFS family first and foremost given the current conditions (even my own family acknowledge that) and now it’s time to get back to work,” he conceded last night.

However, speaking to the media this morning from RFS headquarters, Mr Elliott strongly resisted calls to resign.

“I arrived here last night and I spoke to (southern NSW recovery co-ordinator) Dick Adams,” he told reporters. “I will be supporting the premier and the commissioner, making sure that I get on top of the operations and the deployments that occur today.”

Asked if he planned to stay on in his role, Mr Elliott said “I came back to step up, not step down”. 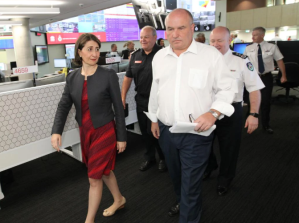 Mr Elliott announced he would cut his holiday to the UK and France short on Wednesday after a devastating day of fires that killed three people in 24 hours, including a volunteer firefighter.

“In light of the escalating damage toll to the South Coast and the tragic loss of a further two civilians and one RFS volunteer, I have decided to return to Australia to stand with our selfless volunteer firefighters and bushfire affected communities as we get through this period of devastating loss,” he said in a statement at the time.