A driver has had a lucky escape after his car rolled twice and was left a wreck in a Melbourne tunnel.

The 43-year-old man lost control of his vehicle at 11:20 PM on Thursday and it rolled twice and landing on its roof in the Burnley tunnel.

Emergency services were on the scene quickly and helped the man from the wreckage. 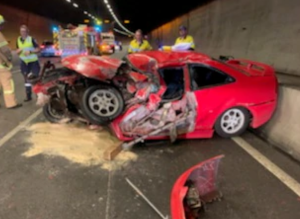 He was taken to hospital with non-life threatening injuries.

The Burnley tunnel was closed overnight but has now reopened.