The piper played ‘Oh When The Saints’ and ‘Danny Boy’ while heartbroken family, friends and fans said goodbye to Danny Frawley as he did one last lap around St Kilda’s spiritual home at Moorabbin Oval.

Around 3,000 people gathered at the ground where Frawley played 72 of his 240 games to give him one final send-off on Wednesday following an emotional 90-minute funeral service at nearby Kingston Town Hall.

Sainters, young and old, wiped away tears as Frawley’s hearse passed slowly by the guard of honour as the sun set over the club he will forever be a part of.

Frawley’s wife Anita and daughters Chelsea, Danielle and Keeley walked behind the car that had Saints scarves hanging out the windows like many fans would on any match day, his coffin covered with a St Kilda flag.

It was a heart-achingly powerful end to a day that was to be endured after Frawley’s death in a single-car accident near Ballarat on Monday, September 9 – the day after his 56th birthday.

Danny Frawley is clapped off at Moorabin for one last time in front of his daughters and his wife. 🔴⚫️⚪️ pic.twitter.com/jRMwiHOYrZ

Dad. Son. Brother. Husband. Champion. Larrikin. Mate. Frawley was a lot of things to a lot of people, but he was universally loved by people whose lives he touched.

That much was clear when the St Kilda legend was farewelled at the funeral service where former teammates and opponents Garry Lyon, Jason Dunstall, Michael Roberts, Stewart Loewe, Wayne Campbell and Wayne Schwass were among those who spoke fondly of their dear friend.

The emotion-charged gathering was uplifting at times, funny at others, sometimes sad, sometimes downright heart-breaking.

But the love for Frawley was there throughout.

“We were just a team, we were just best friends … we just laughed and had fun,” Anita Frawley said choking back tears in a tribute video put together by renowned AFL filmmaker Peter Dickson that finished the service.

“… We would always hug for a bit too long.

“I just wish that he was here now so that I could give him one of those really awkwardly long hugs.” 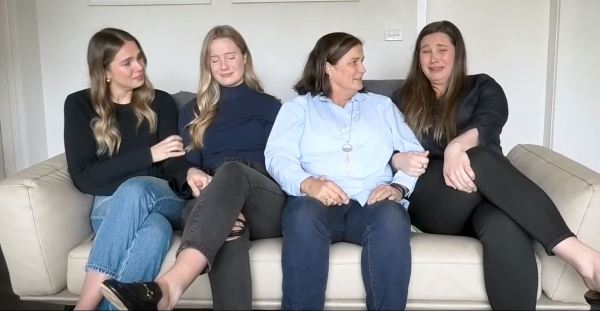 Hollywood star and St Kilda supporter Eric Bana was also there to pay his respects.

Dunstall marvelled at how Frawley, the dogged fullback who used to delight in punching him in the back of the head, became the greatest partner-in-crime he could ever have wished for in their entwined media careers.

Loewe recounted the time Frawley enlisted his help to sneak into the condemned grandstand at Moorabbin to souvenir some seats that ended in typically hilarious fashion.

Well known for his exploits on the field, then as a coach at Richmond and media personality, the larger-than-life character became a strong advocate for mental health issues when he revealed his own battle with depression.

Fellow mental health advocate Wayne Schwass delivered a powerful message on a theme that weaved through the day.

“To quote Danny ‘Manning up in the past was to suffer in silence; manning up now is to put your hand up’,” Schwass said.

“Even in his darkest days in recent weeks he was still championing his message that no man should ever walk alone; that you don’t have to suffer in silence and you should ask for help.

“We may have lost this battle, Spud. But my promise to you, Anita and your three beautiful girls is we won’t lose the war.”