There are many niche things about Victoria’s lockdown that only those went through it would understand, and one of those is the obsession with Chief Medical Officer Brett Sutton.

Our state’s favourite silver fox has grown quite a following since he began appearing at the daily press conference. Oh, how we love to watch him go over daily data… swoon.

Now, fans have been gone crazy once again after footage emerged of the certified CHO-ttie on a Channel 7 reality TV show, Medical Emergency back in 2006 – and wow, he has certainly changed a lot.

On the show, which was filmed ten years before he joined the Department of Health and Human Services, he looks after different patients while workings as a registrar in Melbourne’s southeastern suburbs.

And we must say, he is definitely rocking that solo earring. What a legend. 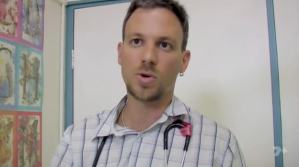 If only he knew while he was removing peas from children’s nostrils what 2020 would entail… oh boy. Head here to see the footage from 7News.com.au.

Love this? You’ll love this bit from Jase & PJ – they’re always up to something!