Many companies have had to tighten up their policies to ensure their employees’ safety during the coronavirus pandemic, but sadly, some customers still haven’t got the message.

It certainly backfired for one woman in San Diego, California who erupted on social media after a Starbucks barista named Lenin Gutierrez told her he could not serve her if she wasn’t wearing a mask.

The woman, named Amber Lynn Gilles, took a photo of the employee (who was wearing a mask) and posted it on Facebook.

“Meet Lenen (sic) from Starbucks who refused to serve me cause I’m not wearing a mask. Next time I will wait for cops and bring a medical exemption.” 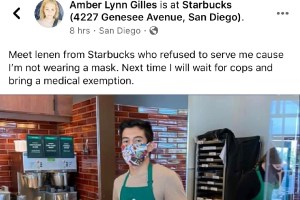 Unfortunately for Gilles, her post saw her be dubbed a ‘Karen’ as people supported Gutierrez for simply doing his job.

Many people expressed that they wish they could give the 24-year-old a tip for his service, which gave another man, Matt Cowan an idea.

Cowan set up a cheeky GoFund Me fundraiser, adding to the description, “raising money for Lenin for his honourable effort standing his ground when faced with a Karen in the wild.”

Many have been generous, so much so, more than $89,400 had been raised within a week!

Cowan made a recent update letting supporters know he had organised a financial advisor for Gutierrez to meet with, as he hopes to use it to pursue his dream of becoming a dancer. He also wants to put it towards organisations in San Diego which is so sweet.

As for Gilles… we think she’ll be wearing a mask for a while!

Want more? Here's one of our fave moments from Jase & Lauren – they’re always up to something! Weekdays from 6AM on KIIS 101.1!
facebook Karen Starbucks