PR juggernaut Bec Brown started out as a musician – mostly singing pop, jazz and musical theatre. When she was 25 she had landed her dream job, but she was actually miserable.

In her new book You’ve Got This, on sale today, Bec talks about her journey to running a highly successful PR and comms agency.

“I GREW UP on a farm near a tiny country town in South Australia. There were forty kids in my primary school, and less than 200 in my high school.

I was a good singer and decided that was what I wanted to be when I grew up. I dreamed of being in musicals on NYC’s Broadway or London’s West End.

I felt lucky that I had a sense of direction because many of my school friends didn’t. But I also wished that I’d chosen something with a more direct path. If I wanted to be a doctor or a lawyer, the path would be straightforward (though far from easy). But the path to becoming a singer? Much less clear-cut. It’d not only require learning to be really great at singing but also knowing how to dance and act, looking a certain way for a role, sometimes being a certain size, getting to know the right people, and being in the right place at the right time, for the right role with the right show.

My family weren’t in show business – dad was a hospital nurse and pastor and mum worked two jobs as an admin executive. But they always supported their four kids in their unique pursuits. That meant driving me, the youngest, fifty kilometres to singing and dancing lessons and encouraging me to practice. They were also big on education and having something to fall back on. So if I wanted to be a singer, they said, I should get a music degree so I had the option of becoming a music teacher if the performing thing didn’t work out.

But my little country high school didn’t offer music as a subject. And my parents didn’t have the money to send me to an expensive private school in the city. There was a really respected public school that specialised in music, but it was a three-hour drive away in the big smoke of Adelaide. After begging my parents to see if we could find a way for me to go there, they said I could audition and sit the test and, if I got in, they’d look for a way to make the finances work for years 11 and 12.

I applied, got an audition date, then practiced and cram-studied. My audition and test went well, so all I could do was wait.

This was 1994. Email didn’t hit the mainstream in Australia for a couple more years, so I had to wait for a letter to arrive at our little town’s post office to tell me my fate.

My parents wanted to open it first. I looked at them reading it, feeling sick. ‘Well it looks like you’re moving to Adelaide,’ Dad said.

After graduating high school, I auditioned to get into Adelaide University’s Conservatorium of Music. Thankfully the audition was worth more than my predictably only slightly above-average year 12 grades and I got in and, while earning a Bachelor of Music, started performing professionally straight away.

And for seven years, across seven cities in five countries I performed my little heart out.

At twenty-five I had a quarter-life crisis and realised that I wasn’t very happy.

As much as I loved performing, it was an incredibly difficult life. Moving around so much meant being away from close friends and family, and this was back when the world wasn’t as connected, when we didn’t have smartphones or social media. Most of the time I worked at night, and going to work when people are coming home to see their loved ones can be really isolating. And as a morning person who loves sunshine and being outdoors, this was extra tricky. Added to this was the pressure of being under the microscope – judged daily on my looks, weight, sound and physical ability, I battled an eating disorder, anxiety and depression.

I started thinking about what else I enjoyed and was good at. I’d always liked writing and storytelling and was a total grammar nerd. I was also naturally curious and investigative, always asking people ‘why?’ I considered journalism, but then thought that this thing called public relations might be a good fit.

So after moving to Sydney, where I didn’t know a single person, while working as a temp executive assistant during the day and singing at night to pay my rent and bills, I went back to uni and did a Graduate Diploma in Media and Communications online, majoring in PR.

And although I freaked out a little about leaving the music industry and having to let go of my long-held dream, I slowly fell in love with PR.

Towards the end of my studies, I landed my first official comms gig as a PR executive at a small agency. Aside from my education and the presentation skills I’d developed as a performer, what helped me get the job was the corporate experience I’d gained working as an assistant to a CEO (which is proof that all experience can help you land a job in your dream industry, even if it’s not 100 per cent related).

However, I CRIED MY EYES OUT most mornings on the bus to work.

It was all so new and difficult.

I was doing PR work for industries I wasn’t very interested in.

I felt totally out of my depth.

And I was starting at the bottom, earning way less that I had been performing.

But I kept going because I knew I needed a change. And boy was I learning. The job was particularly tough because I had a boss with the highest of standards, which meant I was under close, often harsh, scrutiny every day. But as hard as it was, I developed quickly because of it. And it paid off.

One of my most exciting jobs came soon afterwards – I spent five years as Senior PR Manager for the largest record company in the world, Universal Music, working with some of the best-known artists and celebrities of our time. The job involved working across twenty artists at once, dealing directly with their managers, media and sponsors, being up at 4am for breakfast TV and radio, going to bed after 1am after gigs, constantly travelling, and coping with time differences between Australia, the US, the UK and Europe.

But I was earning excellent money with great bonuses, staying in five-star hotels, and had the chance to do both creative and commercial work every single day.

It was fast, furious, exciting and exhausting all at once.

I learnt how to be a great publicist – to know exactly what journalists wanted, when they needed it, and how they liked to be communicated with. I discovered what each stakeholder in the business and industry wanted and why it was best to adapt to suit each of them. And I realised the value of good team management and the best way to organise my time.

While I didn’t want to leave an incredible company full of bright brilliant people, or lose the amazing perks of my job, at thirty-two I still yearned to run my own show and only work on the projects I was completely passionate about.

And, as I’d discovered when I broadened my world view, I enjoyed many things outside of music.

So eight years ago I set up my own PR company, The Comms Department.

We’re a small team – there are five of us across three cities – but we work with some of the biggest and most successful brands in the country.

And I’ve also intentionally set up the business so that instead of having to make a drudging commute to and from an office every day, we all work from home, on the road, or from our clients’ offices.

It’s the best way to service media in a 24/7 world, but it also allows me and my team to work to our strengths. I’m a massive morning person so I start as early as I want. We can all take a gym/ dance/ swim/ yoga break whenever we want to, and we don’t waste time stuck in traffic morning and night.

Other team members who have kids can get them off to child care, or be at home when they get home from school. Being able to do our job anywhere also means we have the ability to travel the world.

And I’m earning more now than I would be if I’d stayed working as a performer or for someone else.

You’ve Got This: The essential career handbook for creative women is on sale today – get your copy here. 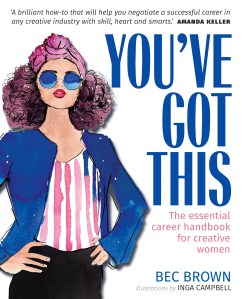