Kmart makes lots of fun toys for kids of all ages and even the parents sometimes give them a crack – though one of them has left them feeling a little stumped!

One mum named Tamika found herself struggling to complete the Wooden Stack & Count Learning Set. She believed the product contained three extra orange rings, which she needed to count all the way up to nine.

“…Well least I have all the pieces and no duplicate number tiles like I’ve seen some people get,” she originally wrote along with the image of her failed attempt. 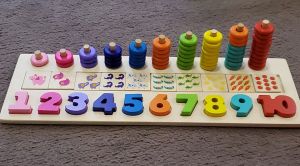 However, when other Facebook users took a closer look, they realised she actually made the mistake.

“Can you swap the six and the 9 over and then the colours will match?” one user suggested.

Tamika laughed it off, editing her post to say, “I’m glad some of us can think as I apparently cannot!! Thank you. God baby brain leaves me in embarrassing situations.”

She wasn’t alone with other shoppers admitting they also made the mistake.

Want more? Here's one of our fave moments from Jase & Lauren – they’re always up to something! Weekdays from 6AM on KIIS 101.1!
facebook Kmart Puzzle Toys