Viewers believe that they know who the next celeb to enter the jungle will be on I’m A Celebrity…Get Me Outta Here! thanks to a big editing fail.

Keen-eyed fans reckon that they know who the next mystery Aussie star on the show will be after they spotted on key detail left in last night’s episode of the show.

On Monday night’s episode, viewers were given a series of clues about the next star set to drop in on the reality show.

However, despite the producers’ best efforts to hide the star’s identity, it may have all been undone by a backpack.

They mystery new camper was carrying a backpack that featured a label with her name, with many viewers guessing that the label read “Alli”. 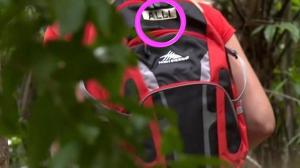 If you’re scratching your head, that’s fine, you’re not alone.

Alli is the younger sister of Aussie singer-songwriter Cody Simpson…and she only has 1.2 million followers on Instagram.

What do you think? Is this the next star to enter the jungle?

Want more? Here's a bit we love from Will & Woody – catch the boys weekdays from 4PM on KIIS101.1!
Alli Simpson cody simpson I'm a celeb I'm a celebrity get me out of here

The Stats Are In: We're All WILD For Netflix's New Drama 'Bridgerton'- You Saucy Devils!

Did 'I'm A Celeb' Go Too Far Last Night Allowing Pearen To Get Bitten On Face By Snake 5 TIMES?!