Recently eliminated Bachelor in Paradise Niranga has taken aim at one of his fellow contestants for making racially insensitive comments during the series.

Niranga said that the cast member allegedly “told several people they wouldn’t take him back to his parents,” while joking about his name’s pronunciation.

He did, however, stop short of naming who the contestant was, however, he did defend Brittney in a long explanation posted to his Instagram story.

In the story, Niranga defends Brittney, writing: “Please be nice to this one. She might be a wild spirit but she has a heart of gold.” 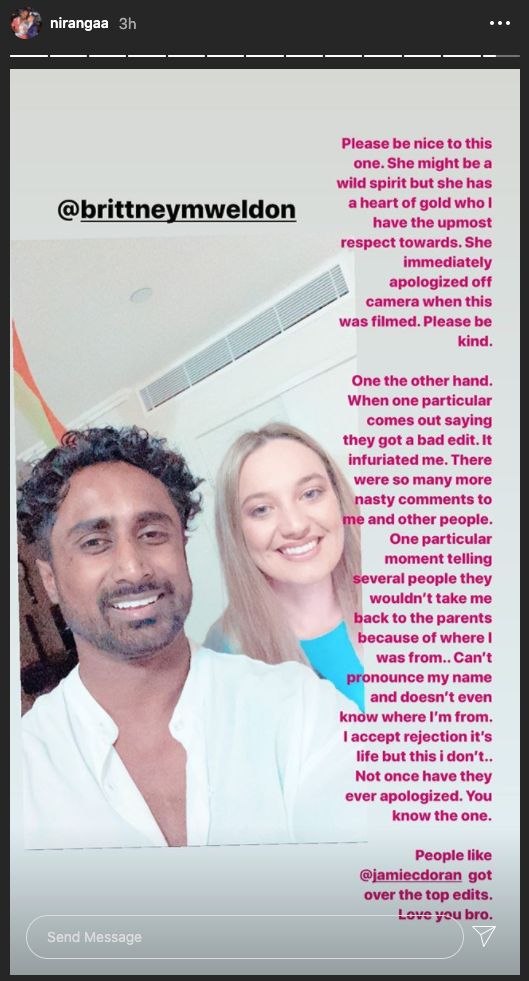 Niranga, however goes on to write that he was on the receiving end of a string of nasty comments during the show’s filming.

“One particular moment telling several people they wouldn’t take me back to the parents because of where I was from,” Niranga writes.

“I accept rejection it’s life but this I don’t..Not once have they ever apologized. You know the one.”

The Bachelorettes For 2020 Have Been Revealed & There's A HUGE Surprise!

Kissing Booth 3 Has Already Been Filmed & You Can Watch The Trailer Here!