Whether it was you or your kids who sat down in front of the telly after school, we all couldn’t get enough of Thomas The Tank Engine. That little blue guy would just go along the track with all his mates… and of course, we can’t forget the big old fat controller!

To celebrate the 75th anniversary of the TV show (yep, it’s been around THAT long!), there will be a special episode honouring its British heritage, dubbed ‘The Royal Engine’.

And what better way to have a royal-themed episode than to have royalty star in it!

It has been announced that Harry, The Duke of Sussex will do a special introduction to the episode. It will be his first solo gig since he and wife Meghan dropped out of royal family duties earlier this year.

He won’t be the only family presence in the episode, as Queen Elizabeth and Prince Charles (as a child) will also be in the episode as characters, living their lives to the fullest on the train platform. What a sight! 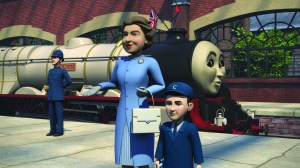 It may have been a while since I’ve gone out of my way to watch a kids show, but I might have to make an exception for this one. The episode airs in Australia on May 16 on ABC.