Australian surfer Mick Fanning has confirmed he and partner Karissa Dalton have ended their marriage.

The couple separated last February but refuted claims their marriage was at its end, committing to “working things out”.

“There has been some speculation about our marriage coming to an end over the past six months,” Fanning posted on Facebook on Sunday night.

“We refuted those claims because we were both committed to working things out since we separated last February.”

“After giving it our all though, late last year we made the tough mutual decision to move on separately.” 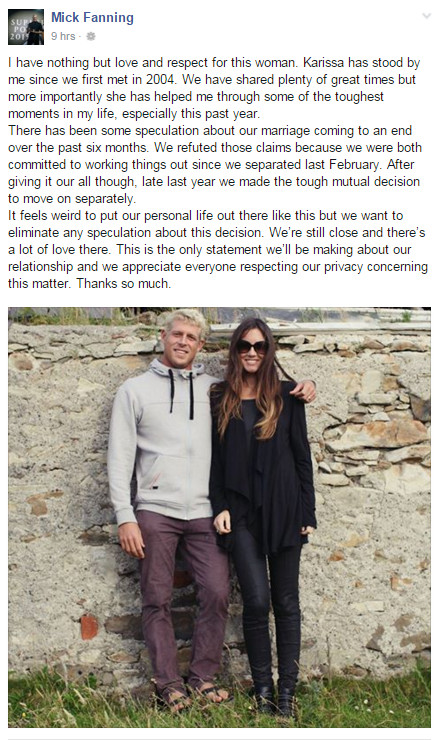 Fanning admits although the pair have moved on, they are still close, with Dalton having helped him through “some of the toughest moments…especially this past year”.

The surfer has endured a traumatic few months, having fought off a shark during a surf competition in South Africa mid last year and then losing his brother just hours before he competed in the Pipe Masters in Hawaii.

“I have nothing but love and respect for this woman,” he adds.

“Karissa has stood by me since we first met in 2004.” “We have shared plenty of great times but more importantly she has helped me through some of the toughest moments in my life, especially this past year.”

The pair were thought to have broken up early last year, however rekindled following the surfer’s attack.

“It feels weird to put our personal life out there like this but we want to eliminate any speculation about this decision.”

“We’re still close and there’s a lot of love there.”

“This is the only statement well be making about our relationship and we appreciate everyone respecting our privacy concerning this matter.”