She Is Coming (to the VMAs!)

And not only do we have an epic red carpet, tons of awards and what’s sure to be an epic performance from Missy Elliot after winning this year’s Video Vanguard Award to look forward to, we now have another incredible reason to watch!

Miley Cyrus has been confirmed to perform her new single ‘Slide Away’ LIVE for the first time. And no doubt it’s going to be emotional as heck!

“@MileyCyrus is coming! Watch her perform her new song ‘Slide Away’ for the first time ever TONIGHT at the #VMAs,” they wrote in the caption.

The surprise track was released just over a week ago and appeared to address her recent split from Liam Hemsworth and the idea of letting go in the lyrics.

“Once upon a time it was paradise, once upon a time I was paralysed / I think I’m gonna miss these harbor lights / But it’s time to let it go,” Miley sings.

“Once upon a time it was made for us, woke up one day and it turned to dust,” Cyrus continues. “Baby, we were found, but now we’re lost / So it’s time to let it go.”

One of the more controversial lines sees Miley make a reference to drug and alcohol use.

“I want my house in the hills / don’t want the whisky and pills / I don’t give up easily but I don’t think I’m down.”

Slide Away – link in bio.

Miley and Liam confirmed their split through a rep earlier this month after just seven months of marriage.

“Liam and Miley have agreed to separate at this time,” the rep said in a statement.

“Ever-evolving, changing as partners and individuals, they have decided this is what’s best while they both focus on themselves and careers. They still remain dedicated parents to all of their animals they share while lovingly taking this time apart. Please respect their process and privacy.”

Just hours before the news was confirmed, Miley had been spotted kissing Brody Jenner’s ex Kaitlynn Carter in Italy, sparking lots of talk about cheating.

Miley has since posted a lengthy statement on her socials hitting back at any claims that she had cheated on Liam.

It’s also since been reported that Liam officially filed for divorce from Miley, sighting “irreconcilable differences” as the reason.

And now, in just a matter of hours, Miley will take to the stage to sing about it! Of course, you probably don’t need reminding that Miley’s past performance on the VMAs stage with Robin Thicke was, ugh, let’s say memorable. 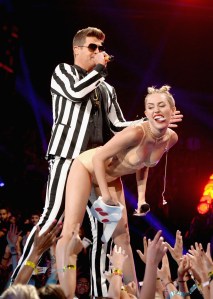 Stay tuned to find out what happens!

Advertisement
Advertisement
Want more? Here's one of our fave moments from Jase & Lauren – they’re always up to something! Weekdays from 6AM on KIIS 101.1!
awards miley miley cyrus Music vma