A controversial decision has been made by Madame Tussauds to separate wax figures of the royal couple within its popular tourist attraction, separating the royal couple.

A figure of the Duchess of Sussex is being relocated to the ‘A-List room’ in a bid to best reflect her “independent celebrity status”. 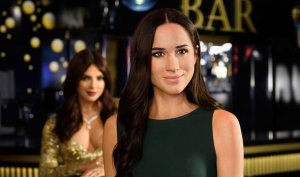 Markle will be shifted to one of the most popular rooms inside the attraction, where she will join the likes of Tom Hardy, Priyanka Chopra Jonas, and The Beckhams.

Prince Harry will return back to the ‘Royal Balcony Set’, joining Prince Charles and The Queen.

“Meghan continues to carve out her own modern take on life as a Royal and we want to mirror her independent celebrity status in the attraction.

“It’s not necessarily forever – and we’re not splitting our loved-up couple!

“We’re just allowing Meghan to mingle in her more-familiar celebrity circle for a while.”

Want more? Here's one of our fave moments from Jase & Lauren – they’re always up to something! Weekdays from 6AM on KIIS 101.1!
meghan markle prince harry royals