He may be doing it tough on Married At First Sight, but it appears Bronson Norrish will be in far higher spirits next weekend when he celebrates his 35th birthday.

The reality star and owner of Party Boat Charters has shared details of his upcoming birthday bash on social media, and has even decided to invite fans along to join in on the fun. But, there’s a catch!

The ex-stripper shared the event “Bronson’s Birthdy [sic] Boat Bash” on his Facebook page. For $40, you’ll get a spot on board a 8-foot catamaran, which will cruise down Perth’s Swan River for over four hours. This also includes a DJ, light nibbles and a “licensed bar with cheap drinks”… and the chance to rub shoulders with the entrepreneur. 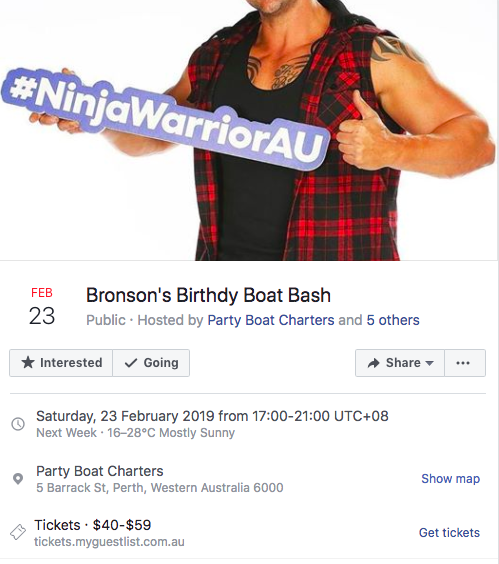 “ANOTHER YEAR OLDER, ANOTHER GREY HAIR!!” the event page reads. “Come celebrate my 35th year of cheating death on board Party Boat Charters with me.”

Unsurprisingly, there are a lot of fans keen on the event with over 200 people “interested” in attending.

Guests have until Monday to purchase their ticket to the event, which will then take place the following weekend.

In the meantime, Bronson’s ‘marriage’ to Ines on MAFS continues to get worse and worse as his ‘wife’ pursues an affair with fellow contestant, Sam. It’s cringe-worthy and binge worthy, yet so utterly addictive!

So, who’s getting a ticket?