We’re not surprised to hear that the hit Aussie reality show, Married At First Sight, makes headlines in other countries. The drama truly is beyond anything you will ever see on any other show.

But when we heard that MAFS news had made it onto ‘The Ellen Degeneres Show’ over in America we were pretty surprised to find out that it wasn’t anything to do with this current and insane season.

In fact, it seems the Ellen audience is a bit late to the party after one of the most memorable contestants from last season of the show, none other than Troy Delmege, made it onto an episode of The Ellen Show just yesterday!

Why do you ask? Well as you should remember, Troy was a rather odd character who will always be remembered for that unique laugh, full on kissing style and of course the technique he uses to brush his teeth. 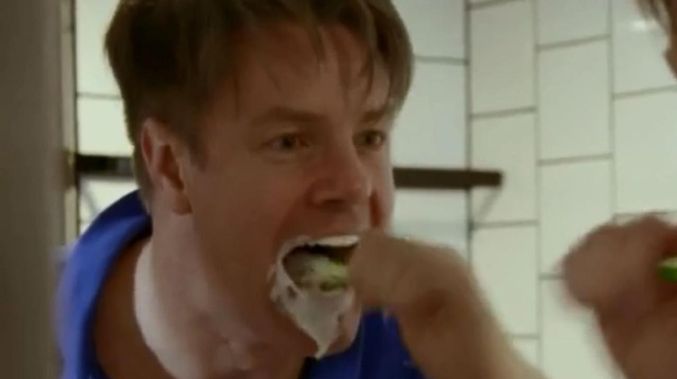 And well, it seems that one of these factors is what landed him an appearance on the episode of the talk show!

Ellen was talking to her audience about some of the most “crazy reality shows out there” when she decided to share a clip from MAFS 2018.

“There’s a show on Lifetime called Married At First Sight and it’s about people who marry someone at their very first meeting,” she said.

“And here’s a man getting ready to meet his new wife for the first time.”

Ellen then played the now infamous clip of Troy getting ready for his wedding day, brushing his teeth erratically in the mirror.

“I’m really not nervous about this day at all,” Troy says in the clip.

“Why do you think you’ll be stunning her?” the producer is heard asking.

Ellen then jumps in and quips, “Haven’t YOU seen the mirror? Yeah, there’s toothpaste all over it.”

Even though Ellen had been talking about the American version of the show, she chose to use a clip from our Aussie version to demonstrate just how crazy the show is

. And clearly that’s because our drama is like no other (as demonstrated by the INSANE fight between Martha and Cyrell on last night’s episode…).

Troy entered the MAFS experiment with wife Ashley Irvin before moving on with fellow contestant Carly Bowyer in the reunion episode.

He’s also been making news here in Australia recently with news he’s going to be entering the world of politics.