Khloe Kardashian isn’t done sending subliminal messages on social media and one of those recent posts on Instagram Story has folks up in arms.

Over the weekend, the E! reality star posted about her St. Patrick’s Day festivity, but she also shared a photo of a shirt that suggested everyone should love their neighbour no matter what. 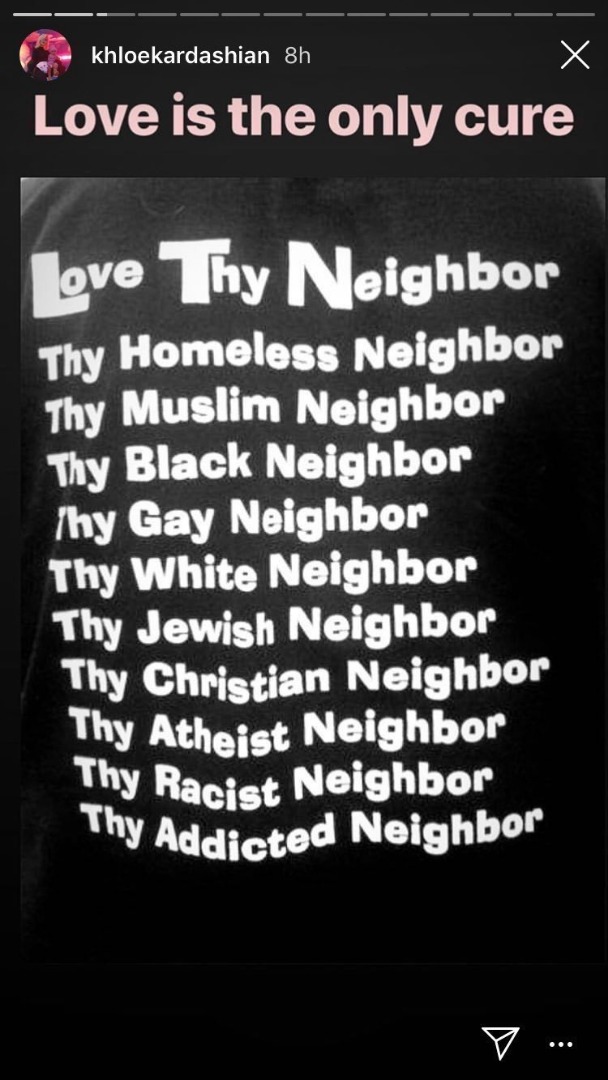 “Love thy neighbor,” a black shirt reads from the top, before listing a number of different demographics, including folks that are homeless, Muslim, African American, gay and more. However, the second to last inclusion on the shirt lists “racists neighbors” as well.

As you might have assumed, the reaction to the post was active, to say the least, with many arguing that her 11-month old bi-racial daughter, True Thompson, goes entirely against that concept.

Scroll on below to read some of the reactions to the controversial tweet.

After a fan tweeted Khloe, “hunny keep raising your daughter the best way you know how. All she needs is her mom. You’re doing great. Keep ya head up,” she responded, admitting that Thompson is a good father.

“Thank you love! You’re so very sweet. But he is a good dad to her. My sweet and special baby True will NEVER be put in the middle of him and I. I can promise that,” she wrote.

She is thy racist neighbor https://t.co/46OYZOaiSN

“love thy racist neighbor” yeah um no . i’m not showing love to someone who disapproves of my whole ass existence pic.twitter.com/VIE8aflSr3

Khloe has a black child talking about love thy racist neighbor lmaoooo pic.twitter.com/IwNZ3Txc3d

Khloe is annoying, as are racists but yes… that is what “love thy neighbor” means pic.twitter.com/MpjSckNLU2