We’re only one episode down, but viewers of The Bachelorette are sure they already know who will take home Angie Kent’s final rose.

After arriving on the red carpet with an enormous bunch of sunflowers and his down-to-earth larrikin charm, suitor Timm Hanly has cemented himself as an early favourite.

While personal trainer Carlin Sterritt is the bookies’ pick to win with odds of 1.33, followed by Glenn with 4.50 and Ciarran at 6.50 on Sportsbet ahead of the premiere, Twitter declared Timm the winner the moment he stepped out of the car. 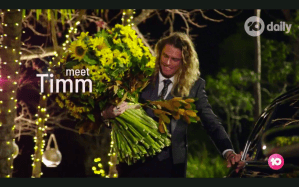 Timm and Angie had instant fireworks after a flirty conversation during which Timm made a very chivalrous gesture by offering Angie his coat. Seemingly smitten – as was the rest of Australia – the Gogglebox star told the camera she “liked his vibe” and gushed about their connection.

“Timm seems different. There’s definitely more to him than his Tarzan locks,” she cooed. 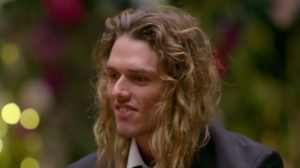 And it seems the feeling was mutual with Timm equally infatuated, gushing that Angie was “unreal” immediately after their first chat.

“I’m just, like, gobsmacked. You know when you look in someone’s eyes if there’s a connection or not, and I think there definitely was. So, hopefully she feels the same.”

And fans on social media are hoping so too:

Timm with too many Ms and a lot of sunflowers is the first cab off the rank and he has the twinkly music folks #BacheloretteAU pic.twitter.com/gt0vdfkQLK

is it too early to call Timm as the winner? #BacheloretteAU